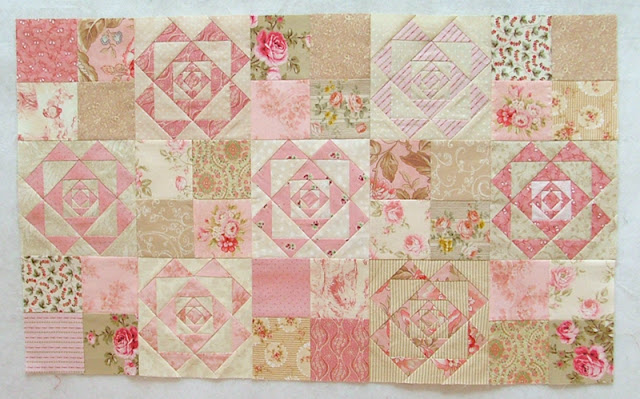 As I said in a previous post, this quilt started with a bunch of fabrics pulled from a sale bin.  I thought it would be a fun challenge to use all of them in one project, but I wasn't sure what that project would be.   I usually tend toward jewel tone colors, but something about these soft neutrals was very appealing. 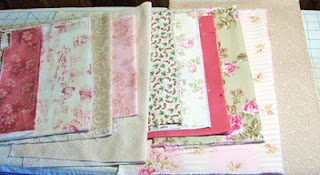 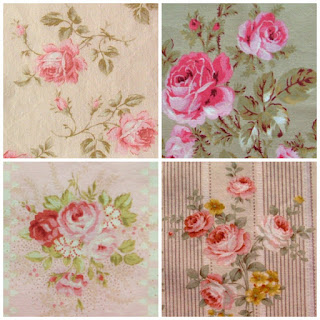 I chose the block pattern of a square in a square because it always reminded me of a rose. 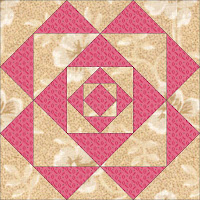 While still designing in my head, I had a conversation with my mother-in-law and she happened to mention that she loved the song "La Vie en Rose".   As a young woman in Montreal, my MIL was a fan of Edith Piaf who was the French singer who made the song famous. 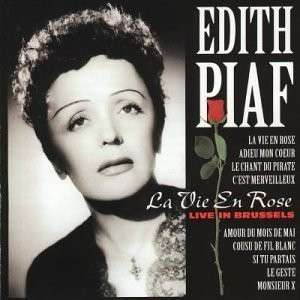 My MIL was  fresh out of secretarial school and working at a law office when she learned that Edith Piaf was going to perform at a cabaret in Montreal.  She was not old enough to go to the cabaret because they served alcohol, but her boss pulled some strings and she was allowed to attend.   I could tell it was a lovely memory for her. I believe she used the word "mesmerizing".

Upon hearing this story, I just knew that I had to name this quilt "La Vie en Rose" in honor of my MIL.   What's more, my MIL is a big fan of neutrals in her decorating style so I knew these fabrics would suit her.

It seemed like the perfect fit.  Then a weird thing happened to make me feel that it was truly meant to be.   I was listening to an online radio station as I was sewing up the last few seams and what song did they play?  You guessed it...La Vie en Rose!    The station I was listening to usually plays show tunes and Broadway stuff, with the occasional Frank Sinatra thrown in, but never a French "chanteuse".  Until now.  I was just amazed at the timing.

You may recall from a previous post  that this fabric group included a Tasha Tudor print with woodland animals on it that I just loved.  I'm happy to say  those cute little critters made their way into the finished quilt. 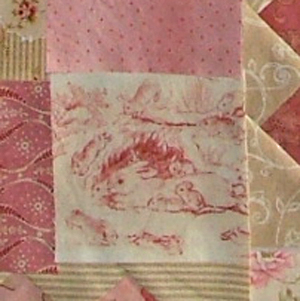 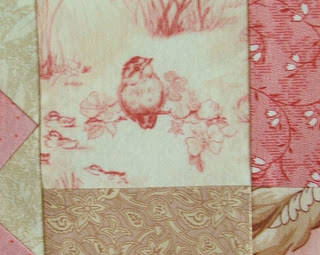 And just in case you were wondering, the block I mentioned in my last post, made with the darker pinks, did not make the cut. 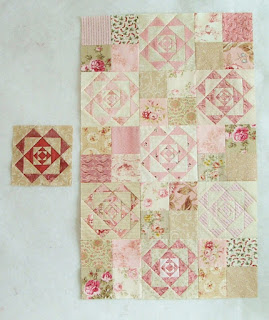 I plan on using it on the back as part of a label.